Through all four years of college, I was a pretty active part of my theatre department’s scene shop. I worked as a carpenter and electrician, and though I enjoyed the latter it was really working with wood that I found most fun. (I heard that snicker. Shut up.)  I’ve always been the crafty sort thanks to an AWESOME Girl Scout Leader in middle and high school and a mom with a serious Michael’s addiction, but the scene shop presented me with the opportunity to create cool looking stuff that only had to look good from 20 feet away. Now, I’ve used some of those skills since college–namely in redoing our kitchen last year before selling our home–but have found that the 20 foot rule rarely applies in real life.

Now a side note. Renovating that kitchen gave me a pretty wicked case of tendinitis that is now over 9 months old. That’s on TOP of the developing case of mild carpal tunnel that the dissertation gave me. That means that I have to periodically put down my crochet (which requires repetitive wrist rotation) and take up some other form of crafting while my right arm heals up a bit.  That means I’ve spent the past few weeks working on cross stitch rather than crochet. (Though I’ve included the Christmas things I made at the bottom of this post because I really want to show them off.)

I’ve been working on a cross stitch of the Portal 2 lemon quotes (originally seen on Facebook some time ago and then rediscovered on BenWermer’s Deviant Art page recently). Now, I haven’t done any serious needle work of this type in a few years as I tend to tire of tiny stitches pretty quickly (yes, even in 14 count Aida cloth). One thing that I’ve had to re-familiarize myself with is just how messy those little floss threads can get if you’re not careful. I always start these projects with every intention of keeping the back of my work as neat as the front, which is something that all the guides say that you should do without fail. Alas, meticulousness is not something I can claim when it comes to the finer needle crafts..  Case in point, I started this project at the middle of the canvas.  You can actually watch my stitches deteriorate as I move up and down the canvas. There are some actual knot blobs back there. 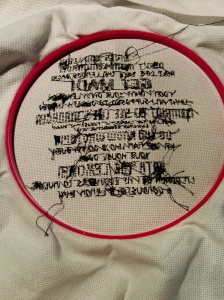 The fun part about this, though, is that unlike a scarf or hat–which would be worn–I can frame this piece once complete. So like flats and set pieces that I worked on in college, this only needs to look good from the front. And possibly from 20 feet away.

Totally looks awesome from the front. Or it will once I finish it.

[This is the first thing I’ve made for myself in nearly a year. It’s so going in my office at work. Possibly partially hidden behind a monitor because I work in a cubicle and think it’s possible that those who pass my office might think I’m a sociopath when reading this without the Portal 2 context.] 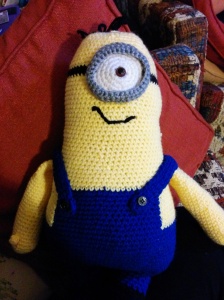 This minion, whose new owner has named him “Kevin”, was made with Loops and Threads Impeccable, an F hook, and a world of patience. SO. MANY. ROUNDS. 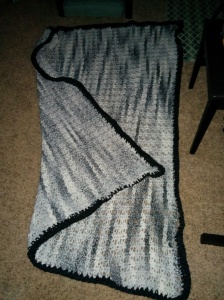 This afghan is the “5 hour afghan” from the Lion Brand website. It took much longer than 5 hours as I made it triple size. It contains around 14 (I lost count) skeins of Lion Brand Thick and Quick Wool Ease in “Marble”.

← Christmas time is here…
Crafting for a Cause →