Oof. I haven’t posted in a looong time. I feel like I should offer some sort of credible reason why, but the simple fact is work was sucking, I was stressed out beyond belief, and the idea of posting to my blog didn’t seem to reduce that stress…so I didn’t do it.

I’ve been doing a lot of crafting for the past 2 months of silence. Crafting, as I’ve stated time and again, is my primary stress reliever. It isn’t at all an embellishment to say that playing with yarn or with embroidery thread quite literally keeps me sane some days.

I’ve been drifting back and forth between multiple projects (like always), and I’ve added embroidery to my repertoire over the last couple months. It turns out that embroidery is super easy until it isn’t. Unlike crochet, it’s harder to frog your work and sometimes things end up looking a little demented. 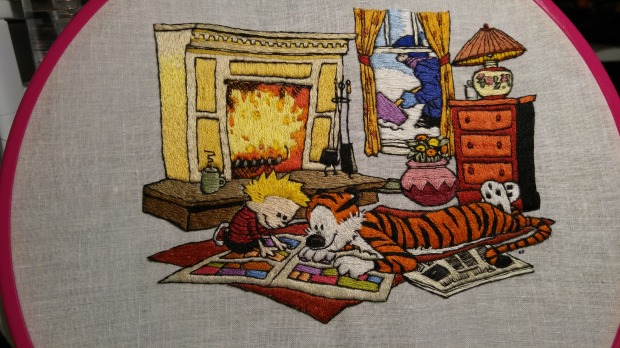 Finished project. All props go to Bill Watterson for being the comic artist genius he is.

The picture above is the finished project…which I am ridiculously proud of, despite its multiple errors. Mr. Butterscotch has loved Calvin and Hobbes since he was a pre-Ker (he was precocious). I made him an amigurumi Hobbes and Calvin for our 1st and 2nd Christmasses together, respectively, and decided that for our 4th (!) holiday together I’d go with a new medium. I suspect Tracer Bullet will be on the agenda for next holiday.

The problem is, detail work is unbelievably tedious and can be extremely difficult if you don’t have a fine enough needle. I was using a needle that was too large for the finer details of the project, so early versions of Calvin looked more than a bit…special. I was originally using a #5 needle (I think?) and switched to a #8 to fix poor Cal’s broken smile.

“It puts the lotion on its skin or else it gets the hose again!”

I have started a new embroidery project now that this one is off at the framer. We’ll see how this one goes. I’m not a very good 2D artist, so I’m relying heavily on tracings to get me started. (Yeah, I know the companion cube’s perspective is off. Me no draw good.)

Other thus-far unposted Christmas projects include my Dad’s chair cover and a blanket for my best friend.

My Dad has a leather recliner that is starting to discolor on the headrest, so Mom asked me to make him a chair cover. This is another example of Swedish or Huck weaving. Dad isn’t a fan of bright colors, so the tones are not exactly what I would’ve chosen normally. However, this did end up matching my parents couches perfectly. Go figure. 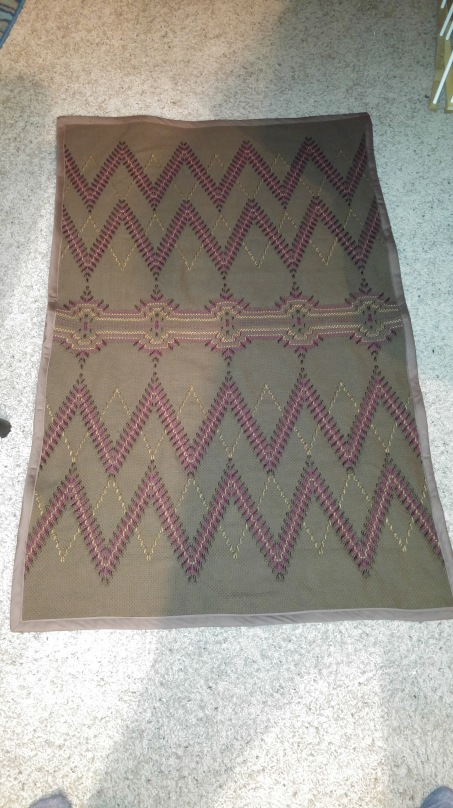 Bonus toes in this picture!

Finally the best friend’s blanket. I have never actually made anything for my best friend because she knits. It always seemed a bit like bringing coals to Newcastle. However, she requested a blanket after seeing some that I’d made others, so I knocked one up as quickly as I could before seeing her. This is another C2C using acrylic scraps from previous project. Said friend loves color (particularly oranges, reds, and greens), so the scrapghan was kind of the perfect thing for her. She also has a cat, hence working this up in acrylic so it would be washable.

There was no time for blocking!

Now it’s January, which means a new year and planning new projects. A friend has recently announced that she’s having a girl soon (first kid!), so I’m working on an undersea blanket and accompanying pink whale ami at the moment. No pics of that yet, but new post to follow when there’s something more than the base blanket to show there. (All the appliqué…)

Happy crafting til next time!

← Posting after an absence
A Whale of a Time →

2 thoughts on “The Post-Christmas Malaise”