A Whale of a Time

In an attempt to post more regularly, I’m trying my hand at shorter posts with the things I’m working on rather than mass postings with 500 items.

I’m supposed to be working on a baby blanket for my friend–undersea themed as mentioned in my last post. But I got distracted. Which was pretty predictable, really. So the blanket will have to wait until next week. Instead, I turned my hands and hook to an amigurumi whale to match the blanket I’m making.

I haven’t made an ami in awhile (they can be pretty fiddly), but I’m pleased with how this one turned out. Except for the smile. I seem to have trouble with smiles in pretty much any medium. *sigh* 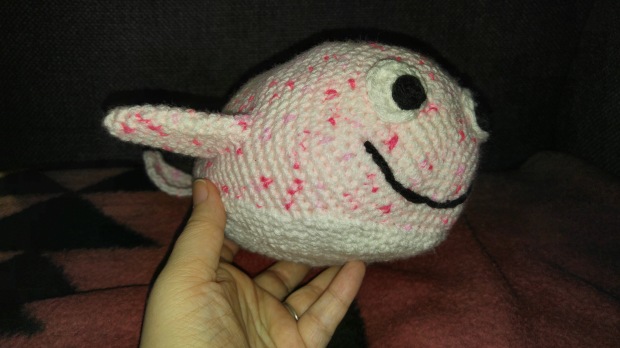 This is a baby gift, so I couldn’t use safety eyes on it for fear of a) friend’s pet finding and eating whale and b) infant finding the safety eyes and choking to death. So I went with sewn-on eyes and stitched the heck out of them to ensure that only complete destruction of the toy can detach them.

I free-hand my amis, so I can’t direct anyone toward a pattern. However, this one was pretty simple. I made a magic circle and built that into an elongated ball using an F hook (I overtighten on amis, so an E is really too small for me). It ended up being 72 stitches at its widest point. When I was reducing, I stopped at the 30 stitch round and started building it outward into a tail. The flippers are 14 stitches in a ring and worked toward a point. I hand shaped them to curve slightly.

I stuffed the thing with poly fill and beat the poor thing into the shape I wanted before attaching the eyes (more magic rings) and a wonky smile. I wove the black of the smile down through the belly and back stitched a few times. The white belly covered the little black yarn marks from the back stitching. The white belly also started as a magic circle. was 68 stitches around because I added an extra “row” to two ends to make it slightly more oval shaped.

I really need to start writing these patterns down, come to think of it…

Mr. Butterscotch, as full of humor as ever, pointed out that the partially finished whale looks like the “cutest bomb ever”.

More completion photos below. Potato quality, of course, because I finished this at 2 in the morning and didn’t turn on enough lights. Because I have the dumb. 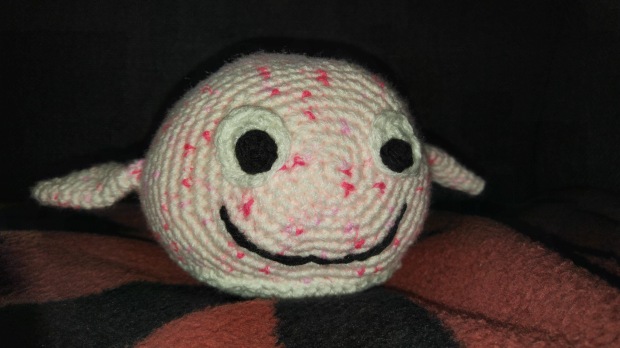 Until next time, happy stitching!

← The Post-Christmas Malaise
A Long Absence →