I continued to indulge my cowl obsession this weekend. It’s been pretty warm here in the Twin Cities (hottish with very high humidity), so I’ve been inside more than normal. I’m one of those people who doesn’t do well with heat, so I stay near an AC during the short summer up North.

Oddly, hot weather usually sends me to thicker yarns. This doesn’t actually make sense to me. Maybe I just like the thicker yarn because it doesn’t feel as difficult to grab/tension when my hands are warm.

I made a mouse and a fox cowl this weekend. The mouse is cute, though I’m not 100% sold on the ears. I think it’s the color combo in low light…that mauvey purple is lovely in the store, but on the (alien looking) mannequin it kind of fades against the grey of the hood. I’m still using Wool Ease Thick and Quick for these. 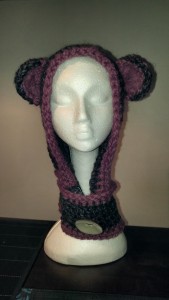 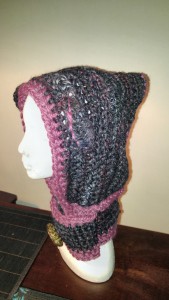 I was almost absurdly pleased with the fox cowl. I decided to experiment with needle felting for the inner ear bits. I’ve needle felted a couple of times before, but I haven’t actually incorporated it into much of my crochet work (oddly). In this case, it was an inspired idea. I think the ears are just about the cutest dang things ever.

Unfortunately I couldn’t find my foam felting block and had to “air” needle felt…which meant a couple of stabbed fingers. Stabbing yourself with a felting needle is obnoxiously painful…the needles themselves are barbed, so even though it’s only a little wound you end up bleeding like a sonofagun. Note to self: find felting block.

That’s it for weekend projects! Back to some of my shelved projects in the coming weeks. I need to start polishing off half-finished afghans before I start anything (else) new…

← And then things were made.
Christmas in July… →

2 thoughts on “Blood, sweat, and cowls.”