And then things were made.

The amount of time between posts seems to be stretching further and further…a fact for which I feel it necessary to apologize. I currently work as an instructional designer for online courses and summer is our heavy development cycle (because we’re prepping courses for the fall semester). My life has been a whirlwind of course prep and my evenings had been spent holed up with my yarn…but I haven’t been posted about it in awhile.

I have made a number of things. I recently got into buttons in a big way, so I’ve been making buttoned cowls for the past few weeks.  These are a few examples: 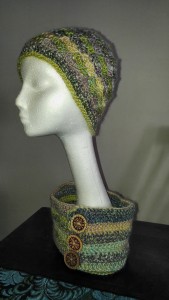 I’m becoming fairly addicted to the Red Heart Boutique Treasure yarns. They’re a thicker, tweeded roving so they work up very quickly. They’re also wonderfully soft and have some gorgeous color combos (Abstract and Watercolors in pictures 2 and 3). I’ve decided that everyone is getting handmade gifts for Xmas this year, which totally justified my button and yarn binge at JoAnn’s last payday.

I’ve also been questing for a new hat pattern. I LOVE the Divine Hat, but I’ve made about 20 of them now and feel that it’s time to shelve that particular pattern for awhile. I’ve been looking into cloches and other 20s/30s styles that might be crochetable. More news on those ventures as they progress.

I also got a bit adventurous and made one of the lovely chunky animal cowls I’ve seen floating on Pinterest. I opted for a frog for my first foray into cowl making (frogs are kind of my totem animal), and I have to say he’s pretty darn cute. 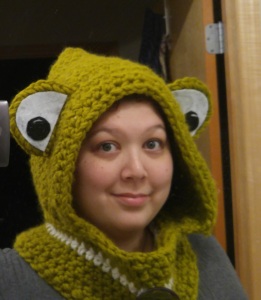 This quickly led to the creation of a plain cowl for my father-in-law (he walks nearly every day, even in the cold Minnesota winter). That came out well too, but I like the animal cowls better. I have the yarn for a fox and a panda, which are definitely the next projects on the slate. 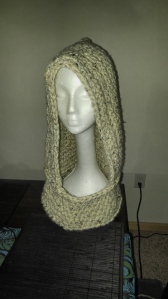 So not much posting, but definitely a lot of crafting happening in my house! I’ll try to be a bit better about the updates so that each update isn’t (yet another) pile o’ hats.

2 thoughts on “And then things were made.”