I love the smell of embroidery floss in the morning…

It’s been a busy week here in the Butterscotch household. The start of a new semester (2 weeks ago) heralded the lighting and subsequent extinguishing of many, many fires at work, so I’ve been putting in some late nights. I have, however, finally completed my Portal 2 project. That’s it below, all framed up and ready to go to work on Monday. It’ll make a nice addition to my dijonaise colored cubicle. 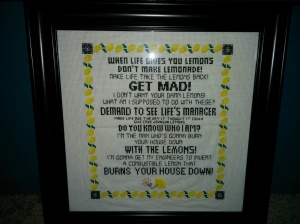 Why, yes. That is a lemon with a fuse in it.

The completion of a project always marks the start of the next, in my household. Wait, that’s not true. Sometimes the completion of a project marks nothing except that my attention turns to one of the six other projects-in-process I invariably have going. I’ve turned my focus to cross stitching for awhile, mainly to give my arm some more time to heal up from the ridiculous amount of crocheting I did over the holidays.

My husband has been playing a lot of Zelda: Hyrule Warriors recently. Now, I can’t really get into this game…the play style is just a bit too much like Diablo III for me (click click click click click all the things die), but I enjoy watching him play as the graphics are really pretty. Ganondorf in particular has caught my eye. He’s bright and colorful, but even better is the fact that his in-game mannerisms and costume are clearly modeled on Kabuki styling. (Did I skip the part where I mention I’m a giant theatre nerd? I’m a giant theatre nerd. And a giant video game nerd. I wrote my dissertation on performance in video games, so when I say nerd I really do mean it.) 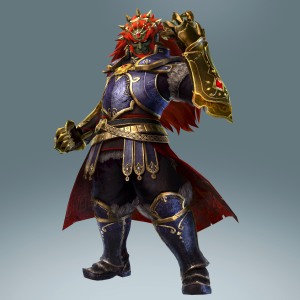 Now, I’m enjoying the heck out of Ganondorf, especially as he’s a playable character in some of the Zelda missions. And because he shoots lighting from his fingertips. What girl wouldn’t love a guy like that?  So I decided to make a cross stitch pattern out of Ganondorf, part of which I have displayed here. (I don’t want to spoil the surprise by showing you the entire thing before I’m done…and this is just a mockup.) 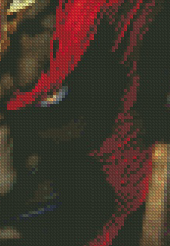 Disclaimer: Ganondorf doesn’t look like this yet. He’s still in nascent stages. Or perhaps I should say, nasal stages. That’s the beginning of a nose there.

Despite the fact that I’ve been working on my new project like a complete Ganondork (geddit?), the majority of my time has been spent doing the thing I both love and loathe the most: organizing. Friday night was spent shopping for and organizing my floss for this project. Now, I’m not a terribly organized person in my day to day life. My desk is generally littered with the detritus of my most recent work project, a magazine, and the last week’s mail. My kitchen always has clean pots on the counter because I can’t be bothered to put them away. My craft materials, on the other hand, are ruthlessly sorted and labeled. Yarn goes into bins by either use (amigurimi acrylics, wool skeins, hat materials) or by project (that Cthullu blanket that I really need to get around to making, that sweater I promised my mom two years ago, that afghan I started for my advisor last year…). My floss is also sorted, placed in numerical order, and kept in its own project specific box.  This is the result of last night’s organizational frenzy: 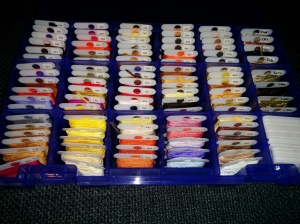 Fellow crafters, look at that and tell me it doesn’t turn you on just a little bit.

It’s going to be an interesting few weeks while Ganondorf and I get to know each other. I’ll post updates as he comes along as well as any other projects that distract me along the way. (Cthullu blanket, I hear you beckoning me with the temptation of ripple stitch insanity.)

← Crafting for a Cause
Unexpected Work Craft Times →